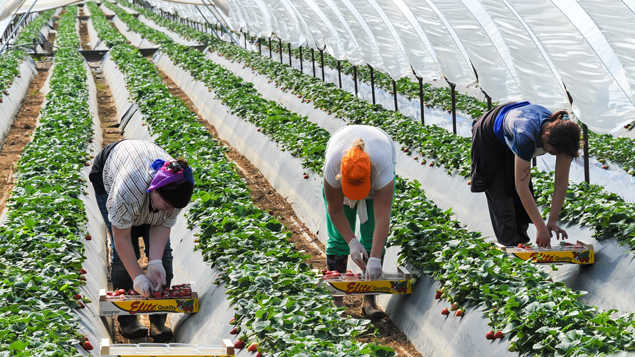 The agriculture sector urgently needs clarity on how it will be able to recruit seasonal workers from overseas next year, as it is revealed UK residents made up only 11% of the workforce this year.

The National Farmers Union’s Horticulture Seasonal Worker Survey, which was completed by 244 growers who collectively recruited around 30,000 people – about half of the workforce – found nine in 10 seasonal workers in 2020 were from the EU, despite a national campaign to encourage more UK residents to “Pick for Britain”.

“We are at a critical time in recruitment for many growers. As freedom of movement ends on 31 December, those growers of iconic British daffodils, asparagus, and soft fruits still don’t know where they will recruit experienced workers from,” said Tom Bradshaw, NFU vice president.

“Workers from outside the UK are absolutely vital to the success of our horticultural sector and we have ambitions to grow more fruit and veg at home. But this success story continues to be undermined by a consistent shortfall in workers over the past four years and rising costs. It creates an unsustainable situation for growers and puts the resilience of domestic food at risk.”

Labour costs for horticultural businesses have risen by a third over the past five years, according to a separate report by agricultural advisory body The Andersons Centre, and costs have increased a further 15% due to the impact of Covid-19 this year.

Bradshaw called for the implementation of a seasonal worker scheme when freedom of movement ends, following on from the “successful” pilot scheme that has operated over the past two seasons.

He said: “If this is not in place by the beginning of the year, we would be the only developed country in the world without such a scheme. It would seem remarkable for the government to take such a gamble when it will hit UK businesses at a time when economic recovery is paramount.”

While Bradshaw said the Pick for Britain campaign was a “great initiative”, the number of UK workers recruited through the scheme was not enough, with seasonal work “simply [not] a viable solution for many”.

He said farm businesses rely on the skills and experience of overseas seasonal workers who have picked crops in the UK previously. But this year many looked for work closer to home and left their placements part-way through, forcing growers to re-recruit.

Last week, the government confirmed the new immigration rules that will take effect from 1 December 2020.