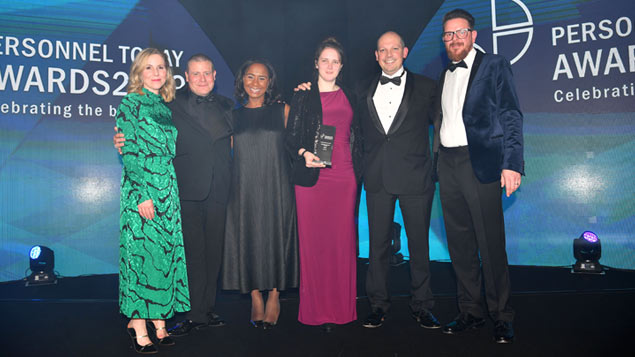 The 2020 Personnel Today Awards winners will be announced next week. Three worthy firms have made it onto the Apprenticeship Employer of the Year shortlist for their commitment to their apprentices, and provision of fulfilling training.

Every year, defence systems manufacturer MBDA sees around 30 apprentices graduate into roles which it would have otherwise filled with expensive external hires – generating a net saving of more than £175,000 per year.

More than a quarter of the company’s annual training budget is invested in its apprenticeship scheme, which is delivered in partnership with external training providers.

To enable apprentices to relocate, the company has increased the scheme’s starting salary by 23% since 2016 and offers a range of benefits including technology payback and support grants.

Some 87% of people are still with the organisation five years after joining as an apprentice and the programme has enabled MBDA to rebalance its workforce, which was previously ageing.

Matt Nugent, an engineering apprentice, said: “The scheme has provided an excellent foundation to become a great engineer, and a range of opportunities to travel and interface with the customer, within the UK and aboard.”

When it was awarded the Elizabeth Line concession in 2014, the organisation needed to recruit more than 1,000 people – 50% of whom needed to be train drivers. It turned to apprenticeships to help resource where needed.

More than 550 apprenticeships have so far been undertaken at MTR Elizabeth Line – far exceeding its target of 263. More than 40% of its current workforce have either done an apprenticeship or are working through one, and programmes are available to new and existing employees.

In 2017 it became the first train operating company to secure ‘employer provider’ status on the Register of Apprenticeship Training Providers and other transport companies have adopted its apprenticeship model, including Aviva Rail London.

Some 97% of its Trainee Train Drivers have elected to undertake its Train Driver Apprenticeship, while more than 100 Customer Experience Assistants are undertaking the Station Team Member Apprenticeship. There are also numerous head office apprenticeships in administration, finance and IT, plus a Level 5 learning and development programme.

By offering apprenticeships MTR Elizabeth Line has achieved levels of equality and diversity well above national average measures. Some 31.4% of train drivers are from BAME communities, compared to a national average of 8.3%; 13.9% are women, more than double the industry average; and 46.2% are under 35, compared with a UK average of 15.8%. Three-quarters of Customer Experience Assistants are from BAME communities and 40% are female.

When it took over the franchise in 2017, South Western Railway found widening gaps in capability and skills, which threatened its ability to operate. Talent pipelines were drying up, particularly in engineering, and 42% of its workforce was over 50.

The solution was the launch of its REACh apprenticeship programme, which aimed to improve leadership capability, attract new talent, improve engagement and increase formal qualifications among its existing workforce.

Its apprenticeships range from level 2 up to level 7 degree apprenticeships in areas including engineering, warehousing, customer service and L&D. It was also the first train operating company to recruit health and safety apprentices.

Leadership development was also placed front and centre of its strategy, with four levels of leadership apprenticeships on offer.

Ongoing support is provided throughout all programmes via online learning, individual target-setting, reviews, mentoring and surveys to establish how apprentices are progressing. This approach has resulted in its engineering apprenticeship scheme seeing a 98% retention rate, and all other apprenticeships have an average 85% retention rate.

All 48 engineering apprentices have been recruited full time and 73% have been promoted into management or leadership roles.