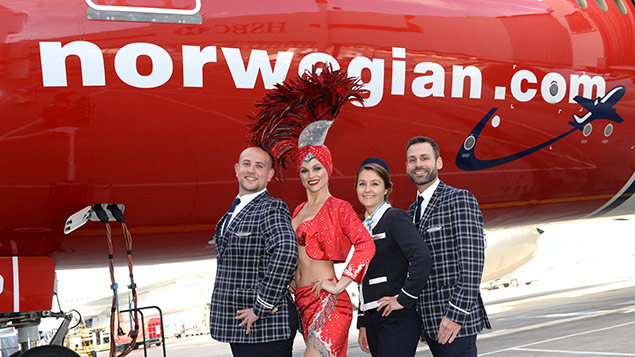 Staff at Gatwick ahead of Norwegian’s inaugural flight to Las Vegas in 2016. Photo: Norwegian

Norwegian Air is to close its long-haul operations to concentrate on its short-haul network in Scandinavia, meaning around 1,100 staff at Gatwick Airport will lose their jobs.

Brian Strutton, general secretary of pilot union Balpa, said the announcement was further evidence that the “jobs death spiral” in aviation continues. Approximately 300 pilots will be made redundant.

More than 2,100 jobs in total in the UK, France, Spain and the US will be lost and Norwegian will offload its long-haul Boeing 787 Dreamliners reducing its fleet to 50 narrow-body aircraft. At one stage Norwegian boasted it was flying more people New York than British Airways.

Jacob Schram, CEO of Norwegian, said: “Our short haul network has always been the backbone of Norwegian and will form the basis of a future resilient business model.”

The Covid-19 pandemic has profoundly affected the entire aviation industry. Travel restrictions have slashed demand for long-haul travel, and most airlines’ planes have been grounded since March 2020.

“Under these circumstances a long haul operation is not viable for Norwegian and these operations will not continue. The consequence of this decision is that the board of directors of the legal entities employing primarily long haul staff in Italy, France, the UK and the US have contacted insolvency practitioners. Norwegian will continue to assess profitable opportunities as the world adapts and recovers from the impact of Covid-19,” said Norwegian.

Strutton said: “This news will be personally devastating for all Gatwick-based crew. The airline has struggled in the face of the ongoing Covid crisis, despite the combined efforts of all the company’s recognised trade unions, who have worked tirelessly to remain flexible and accommodating. The airline has failed for several reasons but there can be no blame apportioned to the pilot, crew or other staff groups.

“This is further evidence that the jobs death spiral I’ve been highlighting for months sadly continues. Make no mistake, aviation remains in serious crisis.”