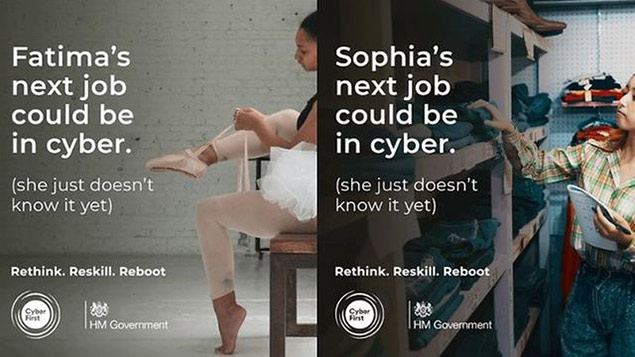 The culture secretary, Oliver Dowden has described a government-supported advertisement designed to encourage people to retrain and switch jobs as “crass”.

One advertisement, part of the Cyber First campaign promoting retraining in tech, pictured a ballerina and stated “Fatima’s next job could be in cyber (she just doesn’t know it yet)”.

Many people have taken to social media to deride the advertisements, saying they represent the government’s disdain for the arts and creative industries. However, the advertisements are not new and are not exclusively aimed at people in the arts sector.

The Cyber First name was initially used by training provider QA a few years ago, then by the National Cyber Security Centre for a schools campaign in 2019 targeting at 11-17 year olds. It is now being used for the government-backed Rethink Reboot Reskill campaign in partnership with QA and depicts a variety of young people in professions including manufacturing, catering, retail and aviation to retrain in cyber skills.

But the picture of the ballet dancer caused outrage among people in the arts sector who are angry at the government’s perceived lack of support for the sector.

Dowden tweeted that he agreed the imagery was crass but stated it did not come from the Department for Digital, Culture, Media and Sport (DCMS), while reiterating that he wanted to “save jobs in the arts”.

“This was a partner campaign encouraging people from all walks of life to think about a career in cybersecurity. I want to save jobs in the arts, which is why we are investing £1.57bn,” he tweeted.

Critics said the campaign represented “cultural philistinism and bad governance in one ad”, while others said it “pretty much sums up what this [government] thinks of the arts”.

The shadow mental health minister, Dr Rosena Allin-Khan, tweeted: “Fatima, you be you. Don’t let anyone else tell you that you aren’t good enough because you don’t conform to their preconceived social norms.”

The social media storm coincided with DCMS releasing details of 1,300 organisations that will share £257m in funding from its £1.57bn arts support package.

Many arts organisations drew up their own versions of the advertisement with similar wording but featuring Prime Minister Boris Johnson and chancellor Rishi Sunak and link the advertisement to Sunak’s recent comments about certain careers not being “viable”.

Some of the social media criticism focused on the use of the ballerina in the photograph to promote another profession but this was found to be a US model release library image and the woman pictured remains a ballerina.