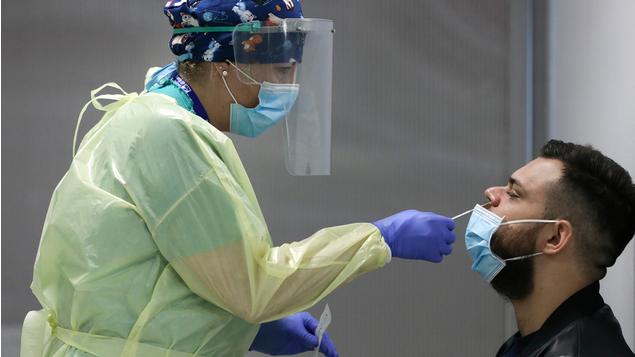 Key workers and people unable to work from home are to receive more frequent Covid-19 testing – even if they are not displaying any symptoms – under an expanded community testing programme.

The Department of Health and Social Care is encouraging local authorities to target testing at people who cannot work from home during the lockdown. NHS Test and Trace will also work closely with other government departments to scale up workforce testing.

Many private sector employers have begun conducting regular workplace testing, including retailers, manufacturers, energy providers and food suppliers. Public sector workplaces, such as Jobcentre Plus premises and military units, were also rolling out testing for workers.

Health secretary Matt Hancock said: “With roughly a third of people who have coronavirus not showing symptoms, targeted asymptomatic testing and subsequent isolation is highly effective in breaking chains of transmission.

“Rapid, regular testing is led by local authorities who design programmes based on their in-depth knowledge of the local populations, so testing can have the greatest impact. We are now expanding this offer to every local authority across the country, and asking testing to be targeted on workers who cannot work from home during this national lockdown, while asking employers to work with us to scale up workforce testing.”

Community testing has so far identified 14,800 positive Covid-19 cases – many of which would not have been found had testing only been offered to those displaying symptoms. Around one in three people with coronavirus are asymptomatic, the government has said.

Utility provider Octopus Energy was among the first companies to pilot mass testing in its workplaces, alongside household names including Royal Mail and John Lewis.

CEO Greg Jackson said: “We started testing in December and it was so well received by our staff that we’re continuing it this year.

“I’m very proud of the Octopus Energy team who have worked incredibly hard to look after our customers this year and also stringently followed all our Covid-19 guidelines whenever they needed to visit the office, with nearly everyone who had to come into the office taking a test.”

Meanwhile, reports have emerged that the government is considering closing shops not following Covid-secure guidelines or failing to limit the number of customers inside.

The suggestion comes amid concerns that supermarkets have become virus hotspots, with many customers thought to be ignoring social distancing guidance and putting staff and the public at risk.

A government source told Mail Online: “There is a feeling that people have just gone back to doing whatever they want, so local authorities will work with supermarkets and other places that are open to make sure they are still Covid-secure. That could well mean a return to capacity limits.”