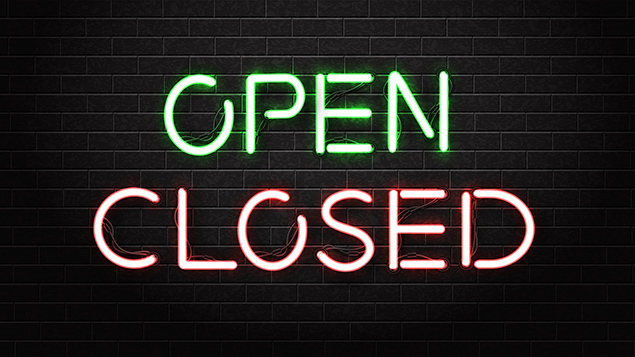 JSS Open or Closed – what tier are you in? Image: Shutterstock

We look at the back-and-forth nature of the government’s economic funding to help businesses affected by the pandemic and examine some of the fine print of the UK’s revised Job Support Scheme announced by the Chancellor of the Exchequer yesterday.

Rishi Sunak has amended the Job Support Scheme (JSS), which replaces the Coronavirus Job Retention Scheme (CJRS), such that employers have to pay significantly less than previously proposed if their business is facing a fall in demand due to Covid-19.

The JSS, originally proposed on 24 September as part of the Treasury’s Winter Economy Plan, had originally proposed a short-time working scheme where an employee had to work at least 33% of their normal hours. The employee would be paid by their employer for that work, but the remaining 67% of normal pay would be split three ways: 22% paid by the employer, 22% by the government, and 23% would be a reduction in wages for the employee.

That has now been scrapped.

In its place, Sunak outlined a plan to provide more support to employers in England’s local Covid alert tiers 1 and 2 – businesses that have seen demand drop but who can still legally open for business.

Staff could now work a minimum of 20% of their normal hours. They would be paid by their employer for that work, but the remaining 80% of normal pay would be split three ways: 4% paid by the employer, 49% by the government, and 27% a reduction in wages for the employee. This scheme is known as the Job Support Scheme Open, or JSS Open.

Meanwhile businesses that have been forced to close because of restrictions, whether that because they’re in tier 3 in England or because of curbs implemented in Scotland, Wales or Northern Ireland, can apply for grants under JSS Closed. This is regardless of whether the employee has been furloughed previously under CJRS.

JSS Closed is now the name of the “expanded” scheme announced by the Treasury on 9 October. In essence, it’s a less generous form of the furlough of the CJRS, with the government providing grants to cover 67% of wages (80% under CJRS), while employees take a 33% hit (instead of 20% in CJRS).

Whether JSS Open or Closed, the employer also pays national insurance and pension contributions on the full amount. Any student loan deductions and the apprenticeship levy must also still be paid. Also for both Open and Closed, there must be a written agreement between the employer and the employee regarding the changes.

Both JSS Open and JSS Closed are available across the UK, but Wales, Scotland and Northern Ireland may offer other forms of support. The Job Support Scheme will be open from 1 November 2020 and run for 6 months, until 30 April 2021, but the government will review the scheme in January.

Employers claiming the JSS may still claim the CJRS bonus – paid as a reward for keeping previously furloughed staff on their books for three months from 1 November – in respect of the same employee if they are eligible. Grants claimed under the JSS can be used by employers to pay an employee’s wages and help meet the Lower Earnings Limit of the CJRS bonus.

The JSS grants can be claimed in arrears from 8 December 2020. Employers must have paid the full amount claimed for an employee’s wages to the employee before each claim is made. In December, employers will be able to claim for salary for pay periods ending and paid in November. Subsequent months will follow a similar pattern.

HMRC says it will publish further guidance by the end of October but for now the policy paper provides answers to all but the most technical detail. There are examples of how to calculate reference pay for workers who monthly wage varies, and there’s a section on how larger employers can establish whether they’re eligible, using a financial impact test.

JSS Open – how it works

The employer will pay 5% of salary for the hours not worked, up to a maximum of £125 per month, although they can pay more than this if they wish. The employer will also pay national insurance

JSS Closed – how it works

From 1 November, for employers that have been legally required to close their premises as a direct result of coronavirus restrictions set by one or more of the four governments of the UK, JSS Closed will support the wage costs of employees who have been instructed to cease work in “eligible  premises”.

Each employee who cannot work due to these restrictions will receive two thirds of their normal pay, paid by their employer and fully funded by the government, to a maximum of £2,083.33 per month, although – again – the employer can pay more than this if they wish. Employees may also be entitled to additional financial support, including universal credit.