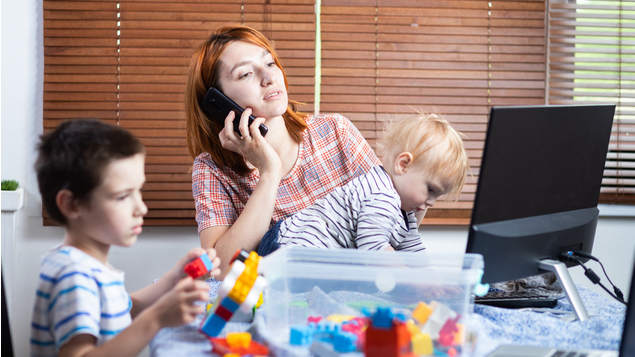 The UK has arrived at a crossroads at which progress in gender equality could either be set back decades, or further advanced through government intervention in driving positive change for female workers, an equality charity has said.

In a report released on Equal Pay Day, the date at which women in the UK effectively stop earning for the rest of the year compared to men, the Fawcett Society says there are warning signs that gender equality is “going backwards” because of the challenges many women have faced because of the pandemic, as well as signs of hope.

“In adapting our ways of life in order to protect the NHS and save lives, we have made significant changes to our working lives,” says the Coronavirus Crossroads report.

“Half of us worked from home for months on end, meaning that flexible working, often denied to women who are more likely to use it to balance childcare or elder care, became a requirement… For a time, our public discourse shifted to truly recognise the value that our carers and keyworkers, mostly female, have always had in our economy.

“These changes could be temporary, with the world of work reverting to the old normal if and when a vaccine arises. Or, as seems more likely, elements of them will persist – because people want them to, because they make business sense, or because we continue down newly-familiar paths.”

While the headline gender pay gap fell to 7.4% this year, this data is incomplete and a true picture will not emerge until 2021.

“With waves of lockdown, and more working from home, our fear is that what limited transparency we had, is at risk. Government should modernise our equal pay legislation by introducing the Right to Know and reintroduce and strengthen gender pay gap reporting,” the report urges.

With research having suggested that women are more likely to have been furloughed and possibly face a high risk of losing their job, it says the government should legislate to protect pregnant women and new mothers from discrimination in redundancy decisions and employers should be required to produce sex disaggregated data on redundancies.

It also recommends that the government:

However, the report also acknowledges the positive effect the events of 2020 have had on gender equality.

For example, fathers were taking on a greater share of childcare during lockdowns, which the report says is an opportunity for the government to reform parental leave to give fathers and second carers a longer, better paid period of leave with their new child.

Secondly, the Black Lives Matter protests and the disproportionate impact of coronavirus on ethnic minority groups have led to closer attention on the impact of racism and how this intersects with gender. To increase momentum in this area, the government should introduce ethnicity pay reporting and require employers to publish action plans, it says.

Finally, the pandemic has shone a light on how vital social care infrastructure is to society, although pay for social care workers, who are 83% female, is often barely above the statutory minimum wage. The report recommends that social care staff are paid a ‘real’ Living Wage.

Aliya Vigor-Robertson, co-founder of HR consultancy JourneyHR, said more should be done to support women during the second lockdown in England.

“While there has been a narrowing in the gender pay gap, we’ve already seen the detrimental impact the pandemic has had on women’s equality at work. During the first lockdown, women carried out the bulk of childcare responsibilities, were more likely to be furloughed, and were more likely to be let go,” she said.

“The impact of the second lockdown is likely to be the same unless more is done to support women during this time. From offering more flexible working options to help working mothers, to promoting virtual networking and mentorship opportunities to keep careers progressing, to building fair and unbiased furlough and redundancy processes, there’s plenty of ways to help. Without support like this, we could witness equality take a step back, hindering so many women from their full potential.”