As Magi or Wise Men from the East, Christian tradition refers to the “stargazers” mentioned in the Christmas story of Matthew’s Gospel, who were led to Jesus by the star of Bethlehem. In the Catholic Church, the “three kings” are venerated as saints. Their Solemnity is the Feast of the Epiphany on today, January 6, 2021. In the Protestant churches, too, the Magi are commemorated on Epiphany. 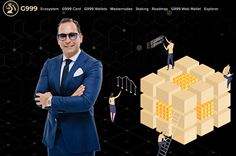 Against this Christian background, Josip Heit, Chairman of the Board of GSB Gold Standard Banking Corporation AG, located at the Port of Hamburg, not only on the feast day of Epiphany, expresses his gratitude for the blessings of success in the year 2020, which has passed a few days ago. It is worth mentioning that Josip Heit just recently released the “G999”, a uniquely electronic system, card reader and app that allows for telecommunications and messenger in one, inspired by the deflationary token economic model, fast payments, micro fees and a variety of other options.

For this project, Heit was able to engage, among others, Sophia Thomalla, her character’s blockchain ambassador for GSB Gold Standard Banking Corporation AG and G999, one of the most famous presenters and actresses in the German-speaking world.

Sophia Thomalla has long been highly interested in cryptocurrencies, especially blockchain technology, cryptography and telecommunications in particular, as well as the technologies behind them.

In this context, Thomalla is of the opinion that the future will be a digital currency, this is likely to be underpinned not least by the fact that since the BitCoin as a cryptocurrency based on a decentrally organized booking system last night (05.01. to 06.01 2021) has again jumped to a high and left behind the mark of 35,000 US dollars.

The BitCoin as a cryptocurrency thus now brings a total of 650 billion US dollars to the scales.

Josip Heit himself is known as a proven business manager and blockchain pioneer who, through his divisions of the GSB Group, has products from the areas of blockchain, cryptocurrency and cryptotechnology developed under the aspect of climate-friendly orientations. GSB’s corporate divisions in this regard are the conventional sectors with their blockchain technology, which also offer crypto services, among other things.

You can see more information about G999 here: https://g999main.net