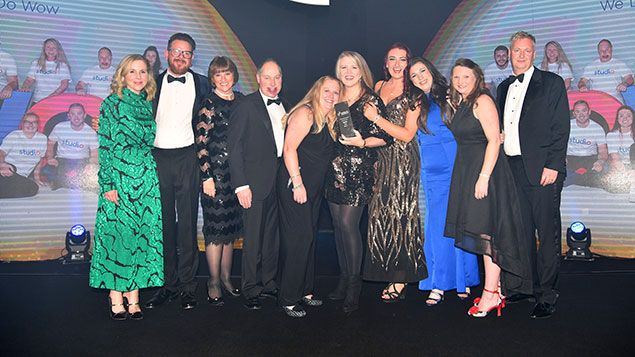 The HR team at Studio.co.uk celebrate winning HR Team of the Year at the Personnel Today Awards 2019

The Personnel Today Awards winners will be announced on Thursday. Our final shortlist spotlight centres on the teams in the running for the prestigious HR Team of the Year title.

The HR department at facilities management firm EMCOR UK sets out to be a function that adds real value to how the business interacts with its 4,000-strong employee base. Its success in doing so has been even more evident when dealing with the uncertainty Covid-19 has brought.

Early on in the pandemic it recognised that managers and employees needed clear leadership and instruction from the HR team. Directors for each function required immediate and accurate interpretation of sick pay, holiday pay, shielding and furlough processes to not only update their management teams, but also to direct their own client base.

The result was the creation of a Covid-19 flowchart, which enabled the executive leadership team to give clear, consistent and accurate advice to staff and beyond. This needed to be turned around quickly, and HR team rose to the challenge by cancelling holidays and extending their working day in order to deliver it as soon as possible.

The flowchart was distributed to HR team members and some line managers to look for gaps in the process, to sense-check it and to make sure it was something senior leaders could understand and front line employees could easily follow.

Line manager feedback was an indicator that the flowchart met what was needed and provided support for their operational colleagues. The huge volume of calls made to HR also reduced significantly.

The introduction of the flowchart helped reinforce that the HR team is at the heart of the organisation. It helped reduced payroll errors, legal fees for advice, and allowed the HR and payroll teams to concentrate on other business continuity matters.

The Financial Ombudsman Service was formed in 2000 to handle complaints between financial businesses and their customers. The 2018/19 financial year saw it encounter its highest volume of new complaints for five years and it faced the challenge of creating a people strategy that was flexible enough to meet demand.

The HR team worked with senior managers to develop a clear roadmap to meet the organisations’ changing needs.

Firstly, recruitment processes were looked at. The team conducted an end-to-end review of the FOS’s selection process and reduced the involvement of managers by 864 hours between July-December 2019 versus January-June. A six month academy for new hires was launched in 2018, giving new joiners an instant support network and ensured they were fully onboarded and trained before they joined front line teams, so they could hit the ground running.

To improve performance and engagement, 70 policies were updated with complementary supporting toolkits/system-enabled process efficiencies, new guidelines, and e-learning on safeguarding and domestic abuse; cancer; and menopause.  Internal leadership development was refreshed and began to incorporate coaching, e-learning and workshops, and a particular focus was placed on aspiring managers.

One of the biggest changes was a complete refresh of its sickness absence policy with a renewed focus on the Bradford Factor as a trigger. Between August 2018 and December 2019, employees in the green Bradford factor increased from 70% to 81%.

With the deadline for PPI claims drawing near, the HR team also recognised that job insecurity was a worry for some employees. To help give staff a choice about their future, it introduced career workshops, a £1,500 personal development budget for further training and qualifications, one-to-one coaching and early outplacement support, and a commitment to let staff know about compulsory redundancies six months in advance.

Since January 2018, the organisation has sponsored more than 530 employees to complete 1,100+ qualifications/training courses. This has helped reduce voluntary turnover from 12.1% to 7.8%.

The Financial Services Compensation Scheme (FSCS) helps people get back on track by protecting them when authorised financial services firms fail.

The board of FSCS developed an ambitious vision for the 2020s, and the FSCS People Team knew that it needed to help employees understand the new strategy and how they personally contributed to its success; increase employee engagement and excitement; equip leaders with the skills to drive performance; introduce more agile working; and deliver a more diverse and inclusive workplace.

Before launching the new strategy, the 14-strong People Team hosted roadshow events in London and Glasgow, which were filmed and shown at other events. Superhero characters were developed to illustrate the strategy and the messages were further embedded with interactive activities.

It retired its engagement channels and launched one engagement platform called HIVE. Lockers of goodies managers could use to reward staff were introduced and Celebratory Shout Outs were held in offices to highlight success. An Engagement Crew was also formed of colleagues from across the organisation.

A development programme focusing on leadership and performance among frontline managers and senior leaders was established, and agile working was embedded across the organisation – which helped it move to fully-remote working seamlessly in March.

In February 2019 the FSCS became the first employer in the world to launch an online age-friendly employer profile which gathered inspiring stories, highlighted age-friendly policies and initiatives, and shared age-related data to prove that it was supporting its multi-generational workforce.

It saw a 16 percentage point increase in employee engagement over two years to 84% and achieved an Engagement Net Promoter Score of 55.  The number of BAME managers increased to 17% from 10% within 12 months and more than a third of the FSCS now come from BAME backgrounds. One-third are women, including 27% of the FSCS’s board, and 33% of new starters are older workers.

In preparation for the largest train timetable change in a generation, which would affect 75% of its services, the HR team at Great Western Railway needed to manage significant challenges around recruitment, manager capability, unionisation and culture.

Critical to the project’s success was the need to change the organisational ‘narrative’ and drive performance to deliver GWR’s Business Plan. This led to the conception of a People Strategy, which was co-created with stakeholders from across the firm informed by performance data and employee surveys.

The HR team was restructured to increase its ability to operate strategically across GWR. Business partners were integrated within operational teams, which facilitated the delivery of the People Strategy and Business.

Occupational Health, Recruitment and Learning & Development functions worked seamlessly to exceed the target of recruiting and developing 318 additional drivers, the majority of whom were internal promotions to fulfil GWR’s desire to provide a career path.

More than 29,000 applications were processed for jobs at GWR, 72,000 training days were held, and around 500 managers were assessed against its refreshed values and behaviours and development recommendations were made.

A change in culture was enabled through the formation of a steering group that fed directly into executive decision-making; the introduction of a Wellbeing Strategy; training 140 mental health first aiders and encouraging the use of on-site health assessments. It also created and delivered an award-winning communications campaign “Plan, Prepare, Perform” to help everyone know their role in supporting the timetable change.

Despite significant change, employee survey results showed an improvement in all 16 measures. 87% of colleagues, an increase of 6% on 2018, would recommend GWR as a great place to work.

When the pandemic hit earlier this year, the HR team at transport operator MTR Elizabeth Line had to act rapidly in light of changing government guidelines and continue to run a safe, essential service.

One such challenge was the development of a furlough policy and procedure with just one weeks’ notice after initially being told it was not eligible for the scheme. It also had to work closely with unions to ensure the success of the new measures it was taking, whilst continuing pay deal negotiations and workforce planning.

An added complication was that the above, and more, needed to be delivered between 1 March and 31 May 2020.

Firstly, its continuity plan was reviewed and priority work was identified. The team acted rapidly to develop a furlough process covering a fifth of its workforce and agree it with unions, and FAQs, letter templates and conversation scripts were produced.

The HR team also revised the company’s wellbeing strategy, which became a rolling, constantly updated resource as mechanisms to support staff evolved. To show how valuable its staff were to the organisation, sick pay was scrapped and staff continued to receive their basic pay if they were unwell. Pay negotiations were concluded while most other train operators cancelled them, and this resulted in a 3% pay rise, a £1,000 pay boost for its lowest earners, and the extension of full pay for maternity leave for up to 39 weeks.

Transport for London, to whom MTR Elizabeth Line reports to, was so impressed with the team’s work that it is now used as a case study for other train operating companies. Concession agreement targets continue to be met despite the challenges brought by the coronavirus.

During the pandemic, customers have relied on Royal Mail more than ever – especially as its key workers have delivered essential PPE, home Covid-19 testing kits and key government communications.

The Group HR team has worked at pace, enabling CEO decisions to be shared via communications channels within hours. This has been heavily reliant on effective collaboration across HR Centres of Expertise and HR business partners for its UK Operation, Parcelforce Worldwide, International and Corporate & Professional functions.

New policies were quickly introduced to ensure safety, including a ‘one person, one vehicle’ policy and contact-free delivery. It developed guidance for handling of Covid-19 NHS testing kits and  manager guidance for cases where colleagues test positive for the virus. In the HR team alone, 500 staff began working from home so core HR services could continue to be handled safely.

A communications strategy was rapidly developed, with the team prioritising channels for promotion of key preventative messaging (e.g. good hand hygiene and social distancing measures). The team also increased the signposting of mental health and wellbeing support and launched a dedicated ‘one stop shop’ intranet page for managers with latest guidance.

Other successes include a dedicated coronavirus helpdesk for all employees, led by a team of eight who have dealt with up to 200 calls per day and 2,600 email queries to date; daily reactive HR Covid-19 FAQs for managers with legal input, in response to employee queries; implementing new sick pay and absence policies; and addressing the low levels of annual leave booked by colleagues.

Some 130,000 employees were recognised for their commitment to the organisation with a recognition payment and a fund has been established to assist those financially impacted by the pandemic.